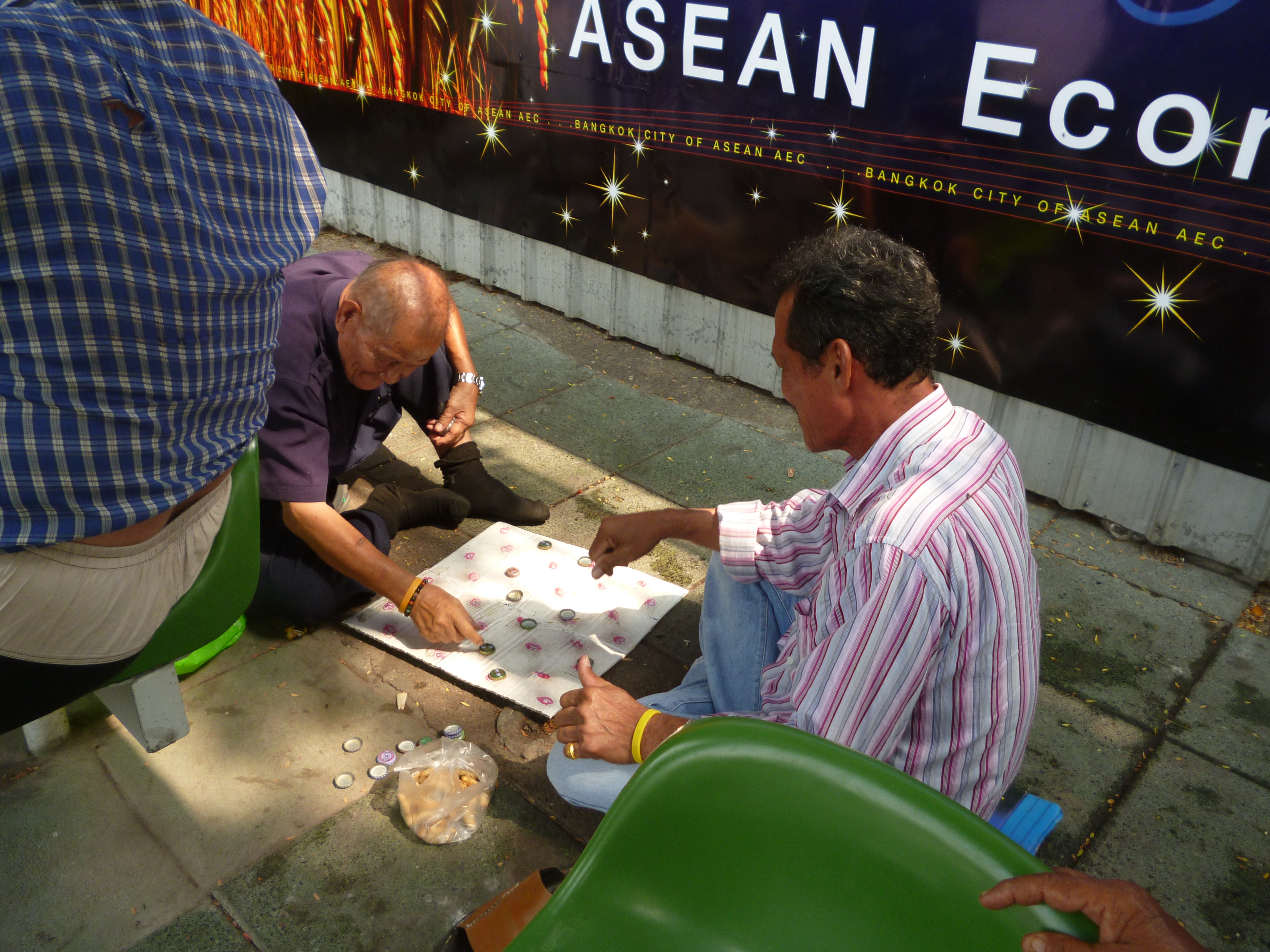 Last week I came back from my three-week-holiday to Thailand. Besides my wish to re-charge in a warm country, I wanted to experience Buddhism from the origin. Thailand seemed to be the perfect place to meet my two objectives.

On Monday 11th of January I landed in Bangkok and although it was the evening already, I was still welcomed by the heat. First objective met 🙂

When I arrived at my hostel I had the pleasure of meeting a Canadian girl named Sheena which the following morning we set off together to discover Bangkok. After just a 10 minute walk we came across the first temple (apparently Bangkok has 400!), where women were gathering together in the kitchen to prepare food. They directed us to all of the bigger touristic temples. On our way we came across a Hindu shrine, found in many houses and markets, which I discovered later. My Thai friend Chorn explained to me that these shrines protect the houses of the Thai. We also got to see the monks walking on the street, dressed in their orange robes. 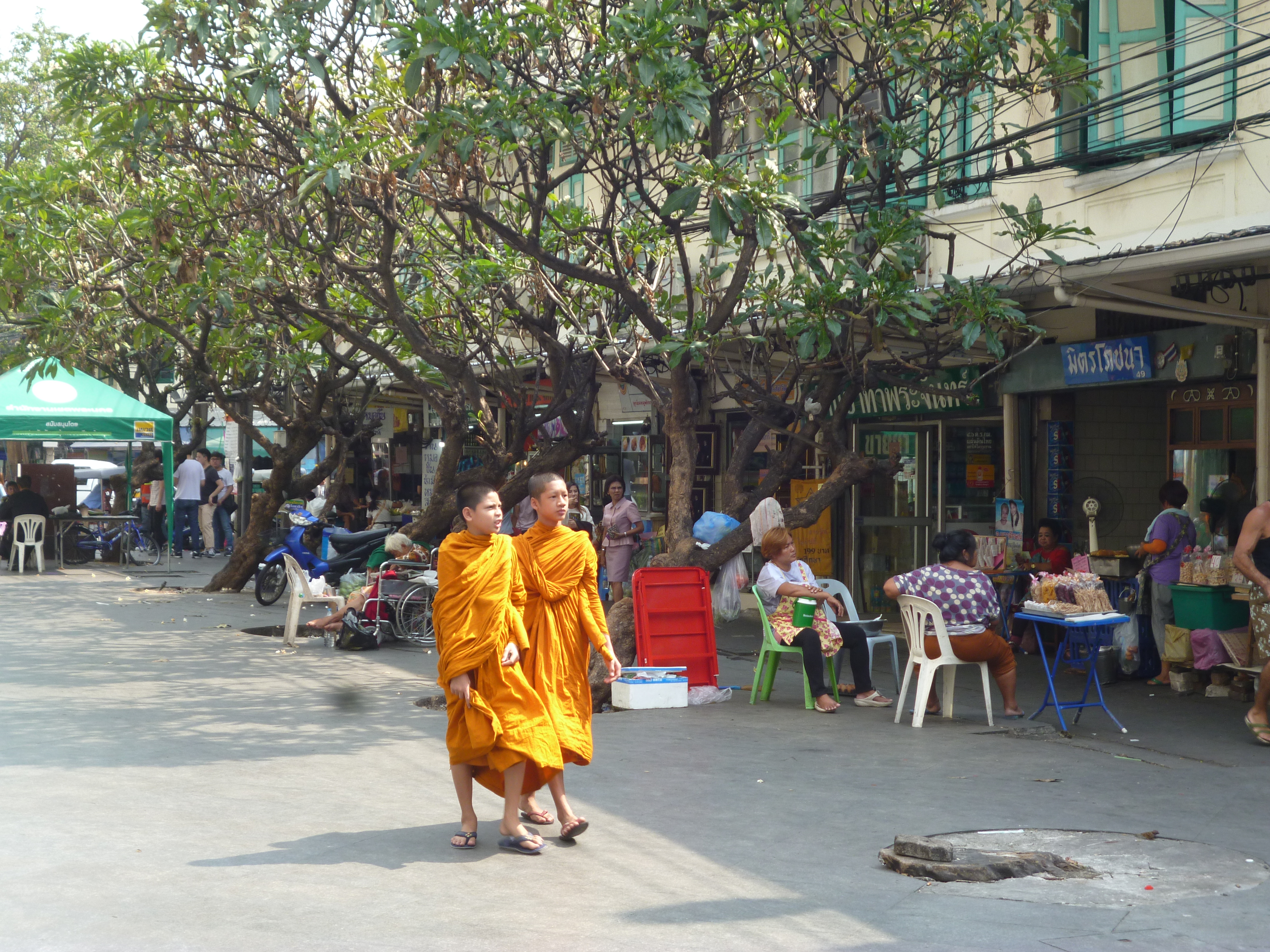 We entered a big temple called Wat Pho, where we found an enormous lying Buddha, hallways full of Buddha’s, lots of flowers and several separate rooms where people were worshipping Buddha. Here we learned that one should never point ones feet towards the Buddha, one has to dress modestly with clothes covering the shoulders and knees and people bow three times towards the Buddha. My friend Chorn told me later that people would chant “namo tassa bhagavato arahato samma sambuddhassa”, but she didn’t know the meaning of it as it was in traditional Pali language.

After two days in Bangkok I travelled further North to Chiang Mai. Chiang Mai is a smaller city, but the amount of temples is enormous! In the centre of Chiang Mai there is a lot more than one temple in every street. Several temples offered chats with the monks in English, which gives foreigners the chance to learn about Thai culture and Buddhism and gives the monks the opportunity to improve their English. Together with a Spanish girl named Lara, that I met in the hostel in Chiang Mai we attended the chat under a tree in the temple called Wat Chedi Luang. We joined a group with an American couple and their guide. At the end of the chat, the American man asked the monk what we in the Western world could learn from Buddhism. The answer of the young monk was “living simple”. 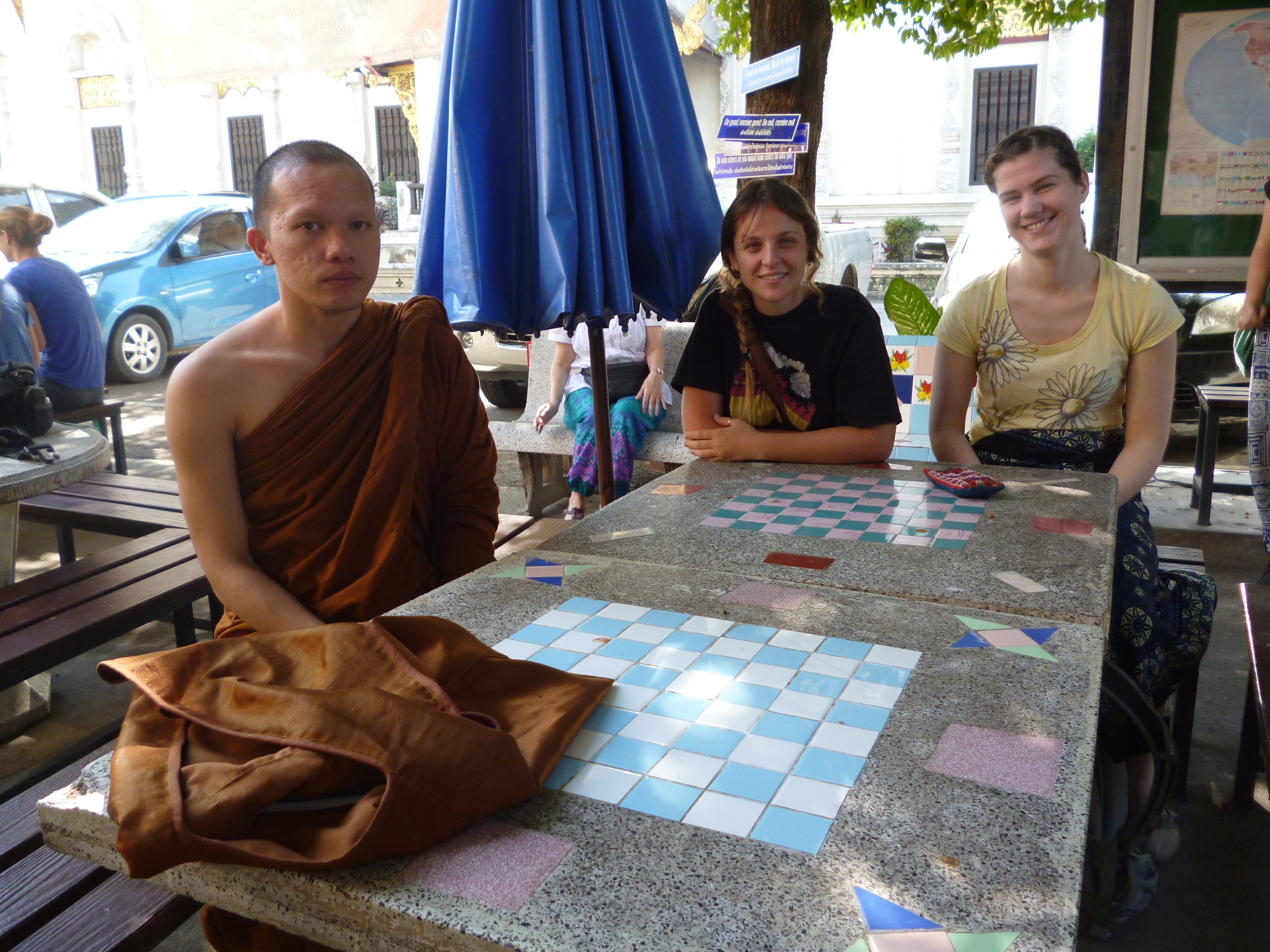 A few days later I was able to experience this “simple life” in the forest monastery “Wat Pah Nanachat” close to the city Ubon Ratchathani in the North-East of Thailand. I got the chance to stay in the monastery for three days as a lay guest. I arrived at 7 am, when food offers arrived and everyone was occupied preparing and arranging the food. I was welcomed to join the meal and could register with the guest monk afterwards. In the meantime I helped preparing the food together with the other lay guests, which were all dressed in black skirts and white blouses.

At 8 am the meal was served. There was a huge table with a buffet of all kind of different Thai dishes, fruits and drinks. We would only get one meal a day, but the amount of food for this dish was enormous! First the monks were allowed to serve themselves and afterwards first the lay men and then last the lay women (we were all seated separately). We got an enormous bowl to serve ourselves. After the meal there was a Dhamma talk, in which a monk spoke about being mindful (paying attention to what we do) with the right intention. Afterwards I informed the guest monk of my arrival and he gave an introduction talk about the place to me and the other new coming lay guests.

The introduction included the following: We should hand in our phones and other devices. During our stay women should wear black skirts and white blouse and men should be dressed in white, we could borrow these cloth from the monastery. We were instructed to participate in the daily routine: waking up at 3 am, than attend the morning chanting (singing) and meditation session between 3.30 and 5 am, the meal at 8 am, tea time at 4.30 pm and the late chanting and meditation session at 6.15 pm. In between we were supposed to do our chores (sweeping, cleaning, helping out in the kitchen and keeping clean our residence).

The guest monk also informed us about the eight precepts:

I was lucky considering the last precept. All matrasses were about 2 mm thick, but I found one that was about 1 cm thick: D Still I think I met the precept, refraining from high and luxurious sleeping places I would say!

The simplicity that the monk in Chiang May was talking about could be found in the International forest monastery in Ubon Ratchathani. I would definitely name the stay in the monastery simple: only one meal a day, simple accommodation and simplicity in our daily schedule. Yet at the same time all necessities were met. The simplicity contributed to be in in touch with oneself, allowing enough time for meditation practice and self-reflection. Once I was hand-washing my clothes as I looked up and saw an Iguana watching me.

Together with development and new technologies we made our lives more and more complex over the past decades. We have to take in much more information than we were used to and we are almost never free from stimulation. And does it really make us happier? Statistics published by the Dutch government (www.nationaalkompas.nl) show that prevalence of depression has been stable over the past thirty years. However, incidence of burnout is increasing. Statistics show that 13 % of Dutch employees feel emotionally burned out. The European Working Conditions Survey examined 25 countries of the European Union (2005), which showed that an average of 22% of European employees experience work related stress. The Dutch employees (16%) experience least work related stress together with employees from the United Kingdom (12%), Germany and Ireland (16%). In sum, we experience loads of stress in this Western part of the world.

I think the advice of the monk, to live more simple is very wise. Rather having, spending, consuming and doing less, but with quality and awareness instead of having, spending, consuming and doing a lot. In this we can take an example of developing countries or the former days of our (grand) parents. At the same time I realize that this is easier said than done. Some stimulation is hard to block and so many things seem to be appealing and attractive. That’s why I listened a few suggestions to try: