Four years ago I lived and worked as a volunteer in Cusco for one year. It has been a meaningful time for me in which I learned a lot about the Peruvian culture, but also about myself. The Peruvians live in the moment a lot more than we do in the Netherlands. For me this meant “enjoying” more, living more intensely. My stay inspired me to live the life I live now in the Netherlands: Mindfully. And I try to inspire others to live Mindfully as wel, knowing the benefits it brings me.

For about a year I wrote blogs about “what we can learn from developing countries”. I try to visit a developing country every year, because it helps me to remember the “slow life” and the important things in life. For me it feels as if people in developing countries live closer to the essence of life, because materialism hasn´t captured them the way it has captured many of us in Europe.

This year I choose to return to Peru. Four years ago I heard about the possibility to travel to Iquitos by boat, a journey that takes 3-5 days. So many days on a boat in the Amazon, that sounded like the slow life I was looking for!

My trip started with a bus ride to Pucallpa, from where I could take the boat. The scenery was astunishing! Outside Lima, the capital of Peru there is mainly mountains and desert. After a while the landscape became greener with more waterstreams. We climbed higher and higher with a lot of curves in the road untill you could see the tops of the mountains covered with snow. This busride usually takes 22 hours, but in my case it took 36! In the afternoon we got stuck in a traffic jam and after a while an ambulance passed. When I asked what happened, my neighbour fellow passenger told me that it happens regularly that rocks fall on the road because of the rainfall. For hours we stood still more than that we drove and when I went to sleep there was still hardly any movement! Even the next day when I woke up we stood still more than that we moved forewards and I felt some impatience. How long was this going to take? One thing was certain, I wouldn´t get my boat to Iquitos on that same day! There was no more choice than accepting it the way it was and soon I returned to enjoy the scenery again. The possitive thing was that I didn´t “miss” any of the landscape. Which was beautiful! After we crossed the mountains the landscape turned more and more into the jungle.

A little later my neighbour forecasted that we would reach Pucallpa by midnight. I was not really happy with that! I usually plan my trips in such a way that I reach places in the morning or early afternoon for my safety. Also the steward in the bus expected that we would reach Pucallpa by midnight and he asked me if I travel alone, because it could be dangerous to travel from the terminal (outside Pucallpa) to town. At first I didn´t really think about it further. I first wanted to see that we really reached there by midnight before believing it! But we did indeed.

I had asked the steward if it was possible to stay in the bus or in the terminal overnight. He expected that this wouldn´t be possible, but he would ask. When we arrived some people around me were discussing about how I could reach the city safely. It was really friendly how several people were taking care and at the same time I felt a lot of caution about who to trust. It felt really vulnerable to have to depend on someone. When I stepped out of the bus also some drivers of motortaxi´s “attacked”. One of them also had a recommendation for a hotel. The steward was willing to accompany me in a motortaxi to the city centre, where I was really happy about. A little bit later I was in my own room with a real bed, happy to have a good night sleep. 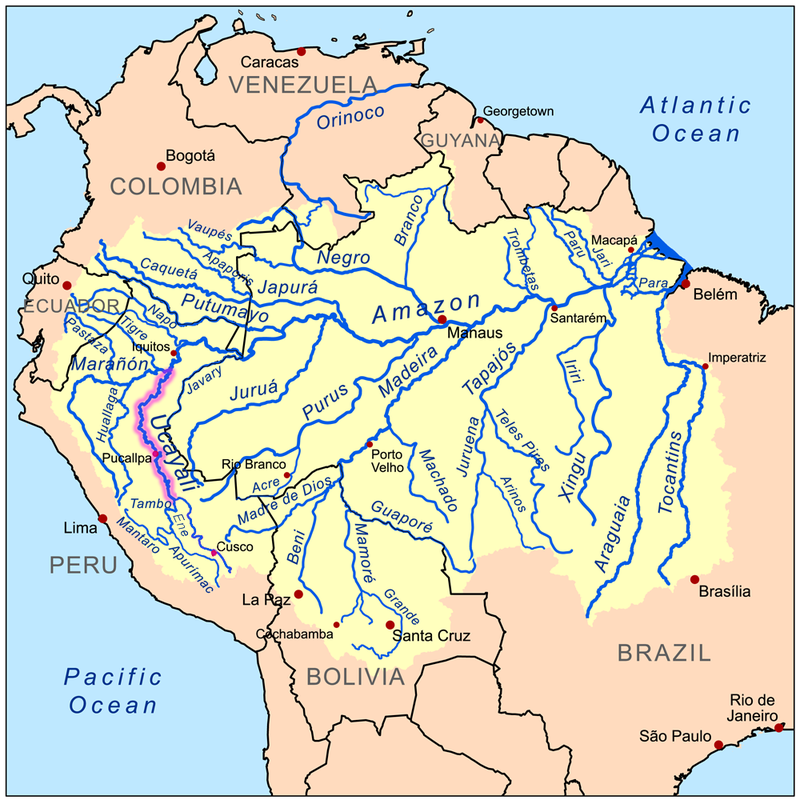 Preparing for the boat to Iquitos

The next day I went to the market of Pucallpa to do some shopping for the trip to Iquitos. I needed a hammock to sleep in, some mosquito repellent, food and water. The tupperware box that was needed to receive food on board I already had. After finishing my shopping I went to the harbour to find a boat. It didn´t last long before I found a boat that would already leave two hours later at noon. I got help to hang my hammock to reserve my spot and went to the hotel quickly to get my luggage. “Return soon” because as soon as the police give us the permission to leave we will leave. I returned a bit later and made myself comfortable in my hammock. The police had come around midday, but because there was too much cargo on the ship we hadn´t got permission to leave yet. Some people on the boat started to get annoyed, because they were on the boat since the day before and already got several promises of leaving soon.

On the boat to Iquitos

Five hours later it was finally time to leave. The boat was still packed! The amount of people on the boat varied between 80 – 130 people along the journey. Everyone had a hammock or a hammock was shared with family members. There were also some people sleeping on mats under the hammocks. Besides that there was a dog walking around and a women travelled with a cardboard box with several ducks. The boat had four floors: on the ground floor and third and four floor cargo was stored. We slept and lived on the second floor.

Shortly after we left the first meal was served. We could make a cue and after handing in our tupperware box and boat ticket we received some soup with rice, a little bit of potatoe and a bit of chicken in it. The food was basic, but very tasting. In the mornings we received some drink (with either rice or oat and milk) with bread. Lunch and dinner was always some rice, with some chicken and/ or beans, some cooked banana and sauce.

After dinner I often went up to the third floor to watch the sunset and to get some rest from the crowd of people. The landscape was astunishing, with lots of green and birds. Sometimes small wooden boats passed. Also while lying in my hammock I was able to see the scenery.

The days passed while reading, talking to other people, eating. On the first day I played cards with a few children and the days after they regularly came to ask for the cards “Señorita, prestennos su casino”. I loved to see them playing! The highlights were when we arrived at a town to make a stop. Some passengers left the boat and some new passengers entered the boat. During these stops there would always enter women and children from those towns to sell fruits, water and soda, bread, cookies, fish and even complete meals. It was the slow life I was expecting.

During the boat trip it had rained heavily several times due to the rainy season. Often a plastic sheet was pulled down to prevent the rain from entering the boat. On the last day the sky turned black again and it started to rain heavily. As usual the sheet was pulled down. However, today it was different. The storm had blown some cargo from the topdesk of the boat and I could see how it was blown over the water. Besides that, the boat was not horizontal anymore as it used to be. The wind was blowing the boat on its side. Panick arose on the ship, people started screaming and children started to cry. We had to stand all together on one side of the boat to keep it in balance against the wind. In the meantime we had all taken a life jacket. I tried to remain calm and in the meantime I took care of a child that was heavily trembling. What didn´t help was that some of the crew had drank alcohol that afternoon. I had seen one of the mates drunk a bit before the incident happened.

Luckily we got into the shore, from where we could escape the boat. We climbed up into the jungle and made a small encampment there with plastic sheet, to protect us from the rain. The water police was called and they came about thirty minutes later. At their arrival the babies, little children and their mothers and some eldery people were evacuated first. To Iquitos it was still a six hour boatride, but the police announced that the rest of us would been brought to a town nearby, from where we would been taken in minibusses. Around three hours later the boat came and in the night we arrived safely in Iquitos.

This event made me realize that we have to value every moment, because it can be over any time. Lying in that hammock, seeing the children playing cards, watching the scenery; how little this all seemed to be, I realized that these little moments of joy are what makes life special.

For me Mindfulness has helped me to live in the moment more and to value all the little things that make life worthwhile. On the 23rd of March I will start another 8-week Mindfulness training. In case you want to apply or you want to have more information, please go to the website